Whilst some of you will have children who are ready and desperate to start school already, some of you may be concerned about how you get your 4 or 5 year old “school ready”

Lucy Patrick is a former primary school headteacher and co-owner of North Kirklees Mumbler. In this guest blog she tells you about how you can support your child as September and the start of their Reception year approaches. 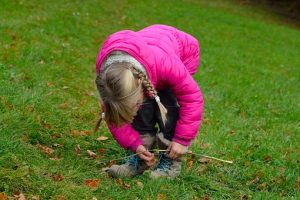 Children are so able. They have skills and abilities that amaze us on a daily basis. Their resourcefulness and creativity far exceed that of adults and their ability to problem solve is simply incredible.

So why, despite all of this, can the majority of children not put on their own shoes and coats by the time they begin school?

My opinion? Because we don’t let them. We don’t expect them to, and, dare I say it, we don’t realise that they can.

I was in the library recently leading a craft session with some mask making. My instinct as a teacher is always to look for the learning taking place in any activity, so, as usual, I stood back and observed for a short while. Many of the children were happily scribbling and cutting out their masks to various degrees of accuracy. Alternately, one child had a beautifully made mask, cut out perfectly and ready on a stick for her to wear as she left the library; her mum had done the lot. That little girl had been given no chance to practice holding scissors, choose colours or use some fine motor movements by carefully colouring inside the lines; a wasted opportunity. I hope that I can convince you here that one of the best ways you can prepare your child for school is by actually doing less for them.

For children starting school, one of the key factors in readiness is their level of independence. If you bring up your child to make choices and think critically this will have a hugely positive impact on their learning from a young age. They will be able to access the school learning environment well, choose appropriate resources and overcome barriers without the need for adult intervention.

Over the summer months slow down. Find time to;

Making just a few extra minutes every day to support your child in one of these ways will almost certainly have a positive impact in a short space of time and increase their level of independence, and independent children make strong learners. Fact